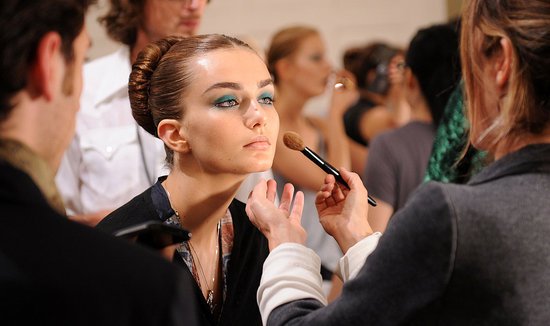 Celebs Prove That Cool Blue Eyeshadow Can Be Hot

Blue eyeshadow may be a hard look to pull off – when not done right, the look can age you 40 years, or transport you back to the ’80s! But lately, some of Hollywood’s blue-eyed beauties have been rocking azure powder, and doing it flawlessly.

According to Glamour.com, Michelle Trachtenberg, Elizabeth Rohm and Italian model Sofia Bruscoli have stepped out with a bit blue eye makeup. The two actresses chose to mix the pigment with dark tones, while Rohm blended her gray smoky eye with an icy blue metallic, Trachtenberg opted for a subtle dusting of mint-colored powder beneath her black-lined lower lashes.

Bruscoli, however, kept the eyeliner limited to her upper lids, and donned nothing but a bold stripe of teal makeup along her lower lash line.

While the applications may have been different, it seems that all three women chose shades that matched their eye color, and the results were stunning.

Women with blue eyes who are eager to try out this look should remember that less is more – a bright cobalt shadow on upper and lower lids may be overwhelming. Instead, opt for a bit of eyeliner, like Too Faced Foiled Liners in Turquoise Tinsel, or a dusting of shadow, such as such as Babor Eye Shadow in Heaven, along the lash line or around eyes’ inside corners.