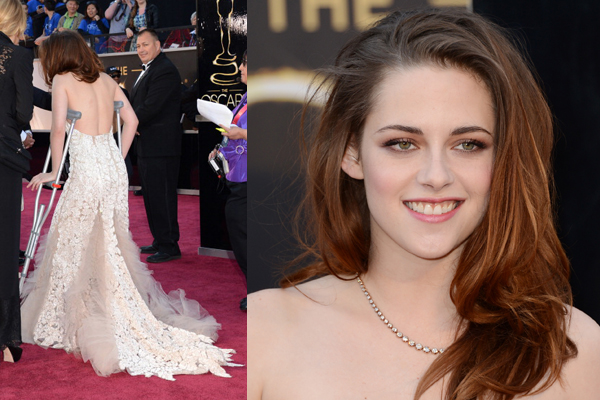 Do You Know How To Get Kristen Stewart’s Flawless Face?

Have you ever wondered how Kristen Stewart gets her glowing complexion before she steps out in public? Recently, the celebrity made headlines when she walked down the red carpet at the 2013 Oscars wearing a beautiful, long ivory dress and elegant makeup to match. Allure magazine was able to contact celebrity makeup artist Beau Nelson, who has been behind Stewart’s looks for the past four years.

“Kristen and I always go for classic makeup with an edge,” Nelson told the source.

At the Oscars, Stewart had a dewy complexion that highlighted her natural beauty. Nelson claimed that he used a sunscreen and a hydrating moisturizer on her face to give her the glow that everyone envied on that celebrity-studded night. Nelson stated that Stewart also requested a deeper shade of lipstick to give her pout some much-needed color.

So how can you emulate Stewart’s flawless look? The Daily Mail recommends starting with a liquid concealer to hide any dark shadows that may be under your peepers. Then, apply a small amount of foundation in the center of your cheeks, nose, forehead and chin to create a cohesive, radiant appearance.