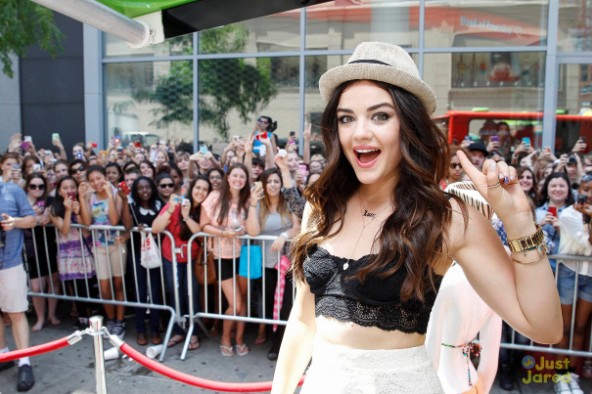 If you haven’t heard of her yet, chances are you’re going to in the near future – actress Lucy Hale is blowing up for numerous reasons. Her starring role on the show, “Pretty Little Liars,” is just one of many projects she’s been working on as of late. Hale continues to gain fans around Hollywood and the rest of the world, which may be why she was chosen to promote the Bongo Boutique at Union Square in New York City.

Earlier this month, Hale was present for the debut of the shop, which drew a large crowd in the heart of the city. In the spirit of summer, Hale wore a black spaghetti strap tank top that showed her belly with a lacy beige skirt. She had an adorable panama hat on her head that shielded her brunette locks from the high sun.

On her pout, Hale wore a subtle pink lipstick. Around her eyes, she chose to go with a black liquid eyeliner that highlighted her peepers, which are known for being one of her most beautiful features.

If you want to highlight the natural beauty and color of your lips like Hale, Daily Glow recommended protecting them from the sun. This can prevent discoloration, which can put a damper on your pout.