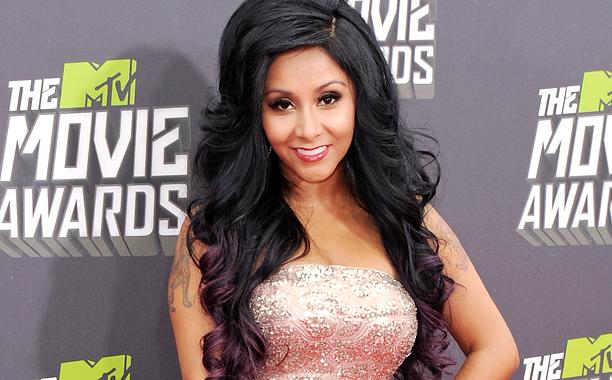 Snooki Keeps Her Face Simple For The 2013 MTV Movie Awards

Nicole Polizzi, better known as Snooki from “Jersey Shore,” is renowned for turning heads on the red carpet. This is just what she did on Sunday night when she arrived at the 2013 MTV Movie Awards in a glittery pink gown that cascaded down to the floor. To top off her ensemble, Snooki wore platform heels that gave her some much needed height.

With such bold wardrobe choices, one has to wonder how the reality star selects the perfect makeup to complement her ensembles. After all, there’s such thing as going overboard, and no one wants to be deemed a train wreck at a public event!

At the 2013 MTV Movie Awards, Snooki played it safe and stuck to neutral eyeshadow that was barely noticeable on her lids. To add some drama, she gave her lashes an ample amount of volume with black mascara and topped off her peepers with dark eyeliner. Her pout was pretty in pink as she smiled for the cameras.

If you tend to opt for bold, striking dresses like Snooki, you might want to use her tactics to keep your look grounded. Don’t be too concerned with adding splashes of color to your face when it’s already evident in your outfit.