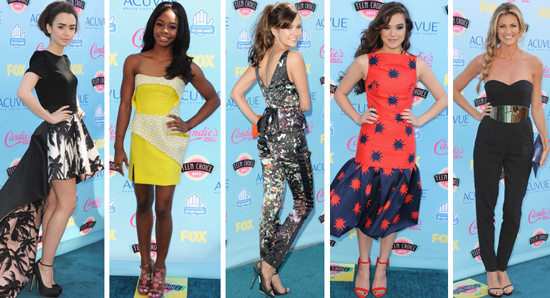 We certainly learned some fashion and beauty lessons from the established actresses at the Emmy Awards and the Tony Awards this year, and there’s plenty more to learn from the young trend-setters at the 2013 Teen Choice Awards. No matter your age or personal style, you can take a cue from these starlets for a daring new look that’s just as wearable for every day as it is on the red carpet.

Au naturale
Some of the young starlets at this year’s awards proved that less is often more when it comes to makeup. For example, Jordin Sparks appeared virtually bare in terms of beauty products, but still managed to look flawless with perfectly arched eyebrows and a subtly shimmering eyeshadow. For a similar effect, trace your lips with a liner that’s only a half shade darker than your natural color and then glaze over them with a sheer lip balm.

Another star who went for the beauty bare minimum is Nina Dobrev, who sported a pink glow on her cheekbones and a neutral lip color. The main attraction of this starlet’s look was her luxuriously long lashes. If you want to copy Dobrev, don’t forget to sweep mascara on both top and bottom lashes, which really makes eyes pop. And who knew a ponytail could be so chic? Parade recommended trying a mussed up version like Dobrev’s to give the hairstyle a sizzling appeal.

Saccharine sweet
Other actresses opted for a more innocent, youthful look – this is the Teen Choice Awards, after all. The secret to Maia Mitchell’s angelic appearance isn’t her halo-like braided hair style, despite what you may think. Follow Mitchell’s lead by dabbing a tiny bit of copper shimmer into the inner corners of your eyes and along your bottom lashline.

Lucy Hale perfected the girl next door look with a side part, soft waves and petal pink lipstick. For the same kind of understated glamor, trace your eyes with a fine-tipped liquid liner on both the top and bottom.

Brittany Snow rocked a slightly more vibrant take with bright coral lips, which truly made her iceberg-blue eyes stand out. The key to getting Snow’s fresh-faced appearance is to forgo eyeliner completely and choose a mega lash-boosting mascara.

Bold and becoming
Some of the attendees definitely amped up their makeup this year, including the former Disney starlet Selena Gomez. A sharp cat-eye and some sheer lipgloss are all you need for this alluring look. Or you could take a cue from Bella Thorne, who proved that nude lips and a metallic brown smoky eye are steamy enough to command attention. Tia Mowry also turned heads with her unconventional electric violet eyeliner.