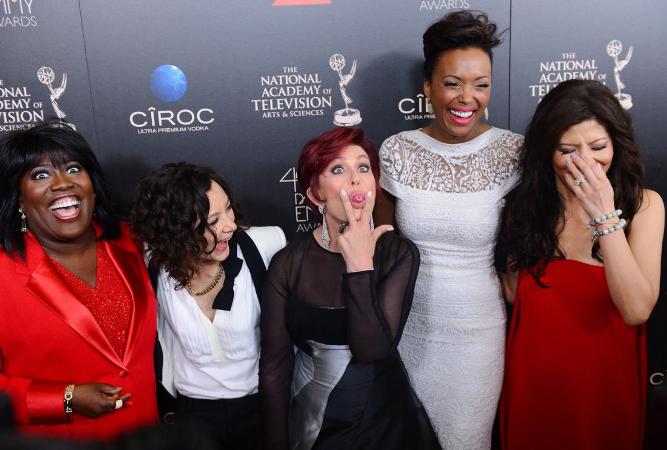 What Can You Learn From The 40th Annual Daytime Emmy Awards?

Just because actors and actresses don’t take up the primetime slot on national networks doesn’t mean that they don’t deserve recognition for their hard work. This is what the Daytime Emmy Awards are for, and the 40th Annual Daytime Emmys recently took place in Beverly Hills, Calif. Some of the stars who attended are familiar faces – Sharon Osbourne and Julie Chen – while others made their claim to fame via soap operas that are watched by a niche audience. Here are some of the women who made an impact on the red carpet with their True makeup, ensembles and accessories as they posed for photographers.

Aisha Tyler
You know it’s almost summer when you see women wearing bright pink lipstick! That’s just what Aisha Tyler did when she made an appearance at the Daytime Emmys. The actress turned talk show host decided to wear a lovely white gown that accentuated her natural curves. On her face, she went bold with eye-popping bubble gum pink lipstick. To complement the white of her dress, Tyler wore silver eyeshadow around her peepers, which created a dramatic look. For even more appeal, she opted for black eyeliner on the rims of her eyes. It was a daring look for Tyler, who doesn’t need much makeup to show off the beauty she’s had since she was born!

Julie Chen
One could argue that Chen is more of a primetime celebrity for her role on “Big Brother,” but she’s made great strides in her career through hosting “The Talk” on daytime television as well. At the Daytime Emmys, she decided to play it safe with neutral makeup. Perhaps this decision had something to do with her loud red cocktail dress that stole the show! On her lips, she wore a nude lipstick, while she chose to add some color to her cheeks with rosy blush. Chen added a little flair to her peepers with dark eyeliner and a touch of gray eyeshadow. She didn’t go over the top, and she didn’t need to with the beautiful dress that she had on!

Kris Jenner
Although she isn’t someone you might think of when daytime television comes to mind, Kardashian clan matriarch Kris Jenner made an appearance at the Daytime Emmys. It might be because Jenner is slated to have her own talk show debut in the near future, but regardless of the reason, she looked fabulous on the red carpet. Jenner had a glossy nude lipstick on her lips, according to Styleite, and decided to go all-out with her eye makeup. Jenner had an abundance of black and gray eyeshadow on her lids, creating a sexy smoky eye look. It was all she needed to complement her little black dress, which gave her an elegant appearance.

Kathy Griffin
This celebrity is one who never seems to have to worry about her looks. Whether Griffin is doing a comedy sketch or an interview on a talk show, she’s certain to look fabulous. As usual, Griffin looked fantastic at the Daytime Emmys. To give her eyes some intrigue, she wore a black liquid eyeliner and created a cat eye appearance. On her lips, she sported a subtle pink lipstick that complemented the blue of her eyes. Concealer seemed to be all Griffin needed to hide any flaws and maintain her beautiful look.

If you’re interested in revamping your makeup routine in time for summer, think about taking some tips from the red carpet. Celebrities always seem to know how to hit the mark when it comes to cosmetics and fashion, meaning you can’t go wrong!