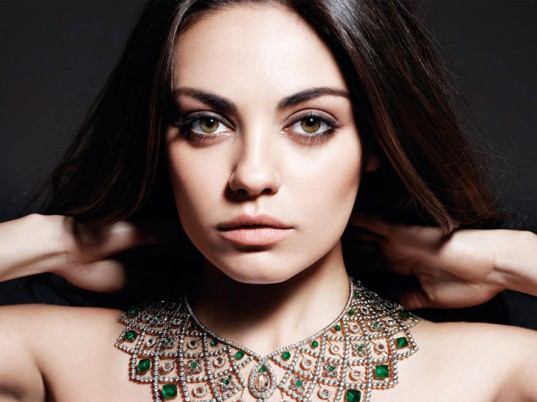 Recently named People magazine’s Sexiest Woman Alive, actress Mila Kunis has been garnering an ample amount of attention these days. Whether she’s with boyfriend Ashton Kutcher or filming a new movie, it seems that everyone is constantly talking about her beautiful makeup and ensembles.

Changing things up a bit, Kunis chose to show off her natural beauty in a recent shoot for Gemfields, a British jewelry company. In the advertisement released by Gemfields, Kunis has nude lipstick as well as a hint of black eyeliner and mascara. No eyeshadow or bold colors were to be found on her flawless face! The actress was recently named the ambassador for Gemfields, which is renowned for its ethical gem mining practices.

If you’re skeptical that you can look as beautiful as Kunis with a small amount of makeup, give it a try! Daily Glow claims that doing so is as easy as moisturizing your skin, then hiding any flaws with concealer and foundation. Choose a soft-toned lipstick to use on your pout – not bold or matte – to create a natural appearance. You’ll be surprised at how using a limited number of cosmetics can go such a long way!