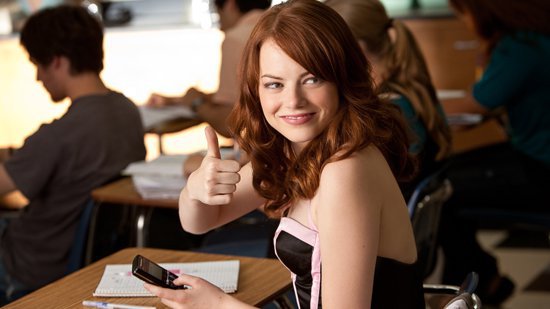 Emma Stone had a phenomenally successful year. The actress hit box office gold with her film Easy A and went on to land the role of Gwen Stacy in the upcoming Spider-Man movie, proving that she’ll be one to watch in 2011.

Along with her career highlights, which included hosting Saturday Night Live for the first time, Stone also spent 2010 making headlines in the beauty world. Though she recently dyed her hair blonde for Spider-Man, Stone showed that makeup doesn’t have to be defined by scarlet-colored strands.

“Yes, redheads can wear red lipstick. For real,” Glamour.com reports, referring to Stone’s scarlet-colored pout at the Vanity Fair Oscar party in March. She paired the bold lip with minimal eye makeup – a touch of brown liner and black mascara.

However, she also proved that contrasting colors can be just as appealing. At the Los Angeles premiere of Easy A, Stone wore bright blue liner beneath her lower lids only.