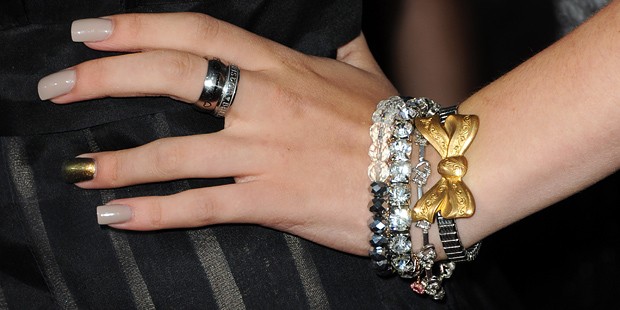 If there’s any indication that fall is here, it’s the changing colors on everyone’s nails. Though it might be hard to let go of the neon corals and seafoam greens, there are plenty of alternative hues this season that are just as playful.

Try any of these trendy looks and you might even forget your end of summertime sadness. Plus – they’re all bound to pair perfectly with your favorite fall ensembles.

Glitter
Glitter nails aren’t a new trend by any means, but they’re getting a whole lot edgier this season with multicolored flecks in different sizes. Refinery 29 explained that sparkles work well over a matte lacquer of the same shade, thus giving your nails a textured look. Depending on how big the glitter is, you could end up with the effect of shimmering sand or grainy sea salt. Or, you could also layer a metallic glitter over a clear base. Stick with one coat of glitter for a subtle finish or layer on several for more impact.

Emerald
Jewel tones in general are big this autumn, but Shape magazine reported that Pantone declared deep green the color of the year. The magazine mentioned the Lippman Collection Nail Lacquer in Laughin To The Bank as a top pick. This metallic polish has a high impact glimmer, so Shape recommended keeping your nails clipped short to avoid a garish or tacky look.

Chocolate
From the leaves on the ground to your leather riding boots, brown is all around during fall. Now, it’ll be on your nails too – according to Shape, dark chocolate is a great way to rock a neutral shade that isn’t boring. Try a glossy formula or pair it with a super shiny top coat to keep the color from looking dull.

Blurple
Despite the silly name, this color is seriously chic, and one of the most popular shades this fall, according to Refinery 29. A fusion between deep royal blue and purple, this rich hue manages to be both eccentric and elegant, meaning it looks just as stunning with a ladylike dress as it does with casual boyfriend jeans.

Fuchsia
Pink isn’t just for spring and summer. In fact, electric fuchsia looks striking with some of your staple garments this season, such as navy tweed jackets, eggplant sweater dresses and kelly green pullovers. Refinery 29 explained that the shade can help to liven up neutral outfits that would have otherwise looked drab. Plus, it’s far more unexpected and unusual than your typical fire engine red, but it’s just as eye-catching.